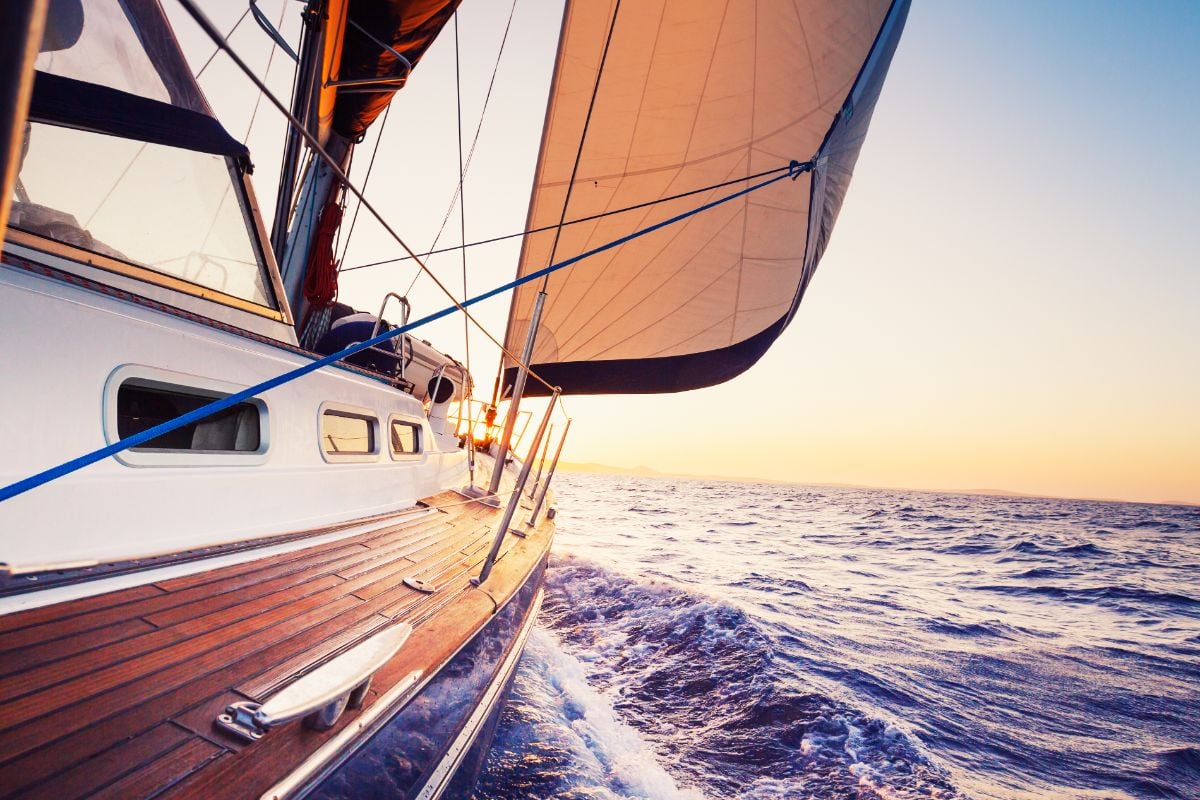 Sails, like boat hulls and engines, have evolved. For example, the ships that traveled the oceans a little over a hundred years ago had multiple masts and may have had eight to ten sails. Likewise, as recreational boats have evolved, so too have many sail types used by wind-powered vessels.

Many of what was and what is are similar. However, early sailboats had different sails made from canvas. Likewise, the sails of today’s boats use space-age materials very different from the canvas sails of yesteryear.

The size and rig of a boat determine the type of sails it will use and the number it employs. For example, small boats like the Optimist pram, Laser, and sunfish use only one sail. While sloops use two sails, a main and jib, cutter-rigged sailboats have two headsails and a mainsail.

At the other end of the spectrum are ships such as the Golden Horizon with 35 sails that can drive it across the world’s oceans. Square sailboats still had mainsails, topsails, and jibs. However, they cannot sail close to the wind, which the gaff and Bermuda rigged boats could.

A square sailed ship can only get within 60 degrees of the direction of the wind. However, small Bermuda-rigged sailboats can get as close as forty degrees to the wind.

A boat that can sail higher (closer to the direction of the true wind) will reach its destination first. The reason is that it will not need as many tacks to make headway and close its distance to its goal.

Along with their diminished usefulness and the advent of steam, gas, and diesel-powered engines, the great sailing ships of yesteryear are mostly gone or in a floating museum somewhere.

However, in the 1960s and 1970s, many boats came to market. From dinghies to hundred-foot-long sailboats and vessels such as the Maltese Falcon and the Golden Horizon, the creativeness of naval architects still comes through with surprises.

Therefore, sailing is long from dead. On the contrary, even those who power huge ships across the world’s oceans have considered adding sails to reduce fuel usage on their travels. 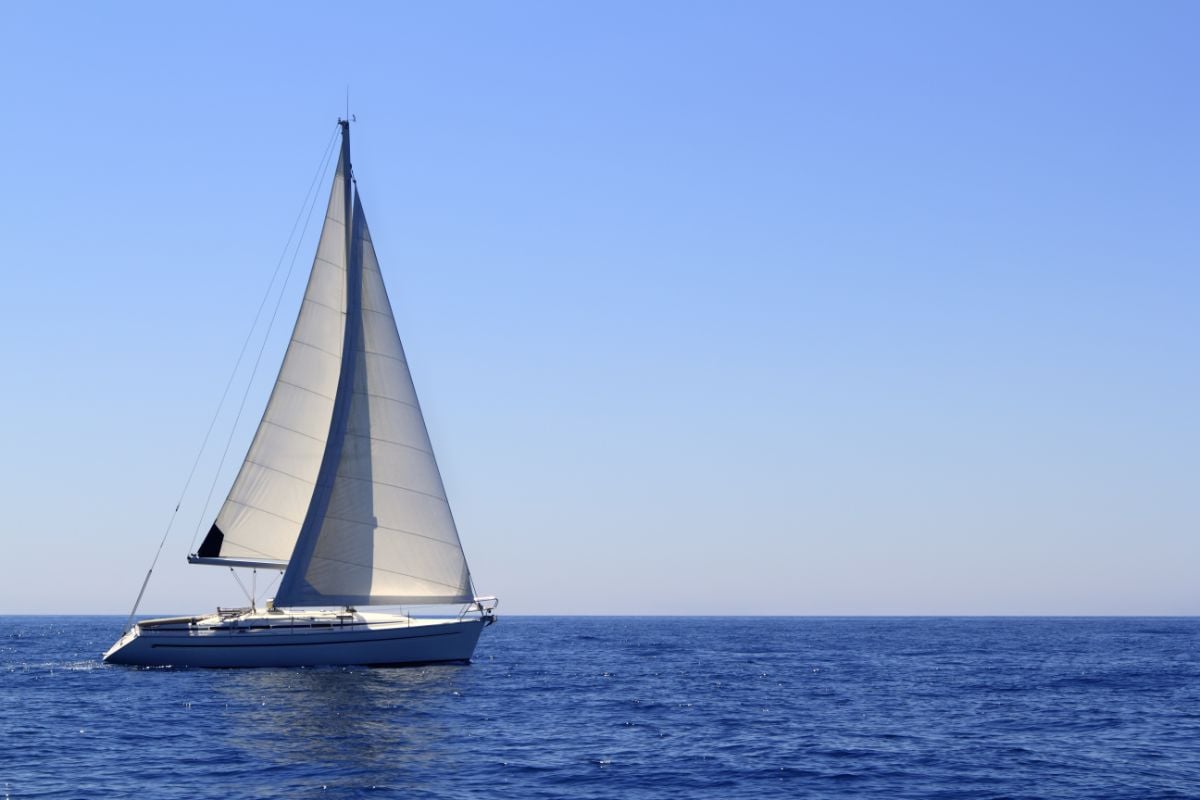 A mainsail is the largest sail of a boat, and you attach it to the back of the main mast. If you have a boat with two masts, the smaller of the two is the mizzenmast, which carries the mizzen sail. The mizzen is smaller than the main on boats that are Bermuda rigged.

However, gaff-rigged ketches and schooners may have a mizzen sail almost the same size as the mainsail.

Headsails (jibs) are set in front of the mast. You can have jibs for light air, medium air, and storms; of course, they all have different names that are often based on their use. 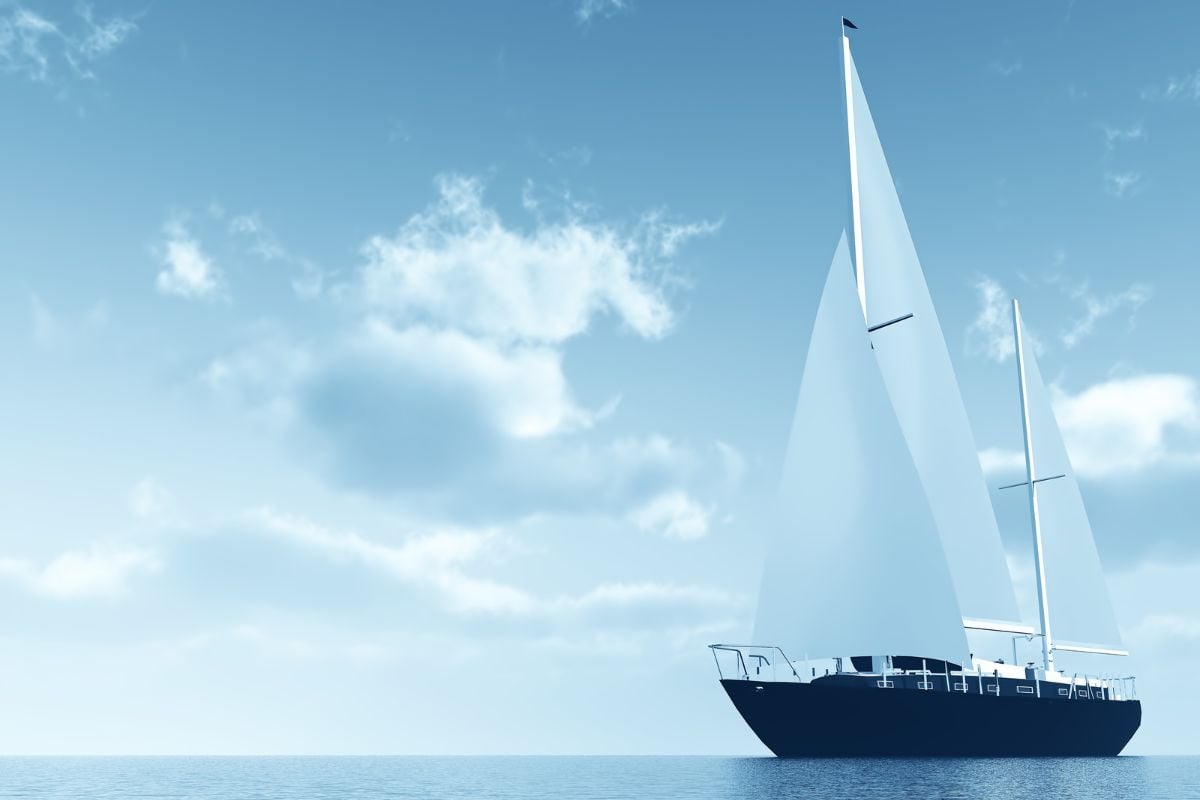 The boating industry changed slowly. When smaller yachts were being built in the early to middle 1950s, many privately owned sailboats still had gaff rigs, as do a few production boats today.

Catboats, which have a single mast and a single sail, are often gaff rigged. However, even today’s gaff-rigged boats use modern technology to make them more efficient than the boats that came before them.

What is a Gaff rigged boat?

Most modern sailboats use a mainsail called a Bermuda or Marconi sail. These sails are triangular and can be formed into a better foil shape than a gaff-rigged sail.

Gaff-rigged boats have a mainsail that hangs in the same place as modern sails. However, they are rectangular and have an upper boom (gaff) and a lower boom that holds the sail open and shapes it.

Although this type of sail and rig are very effective, the Marconi rig is easier to handle. It does not require a crew of husky sailors to raise and lower the sails. 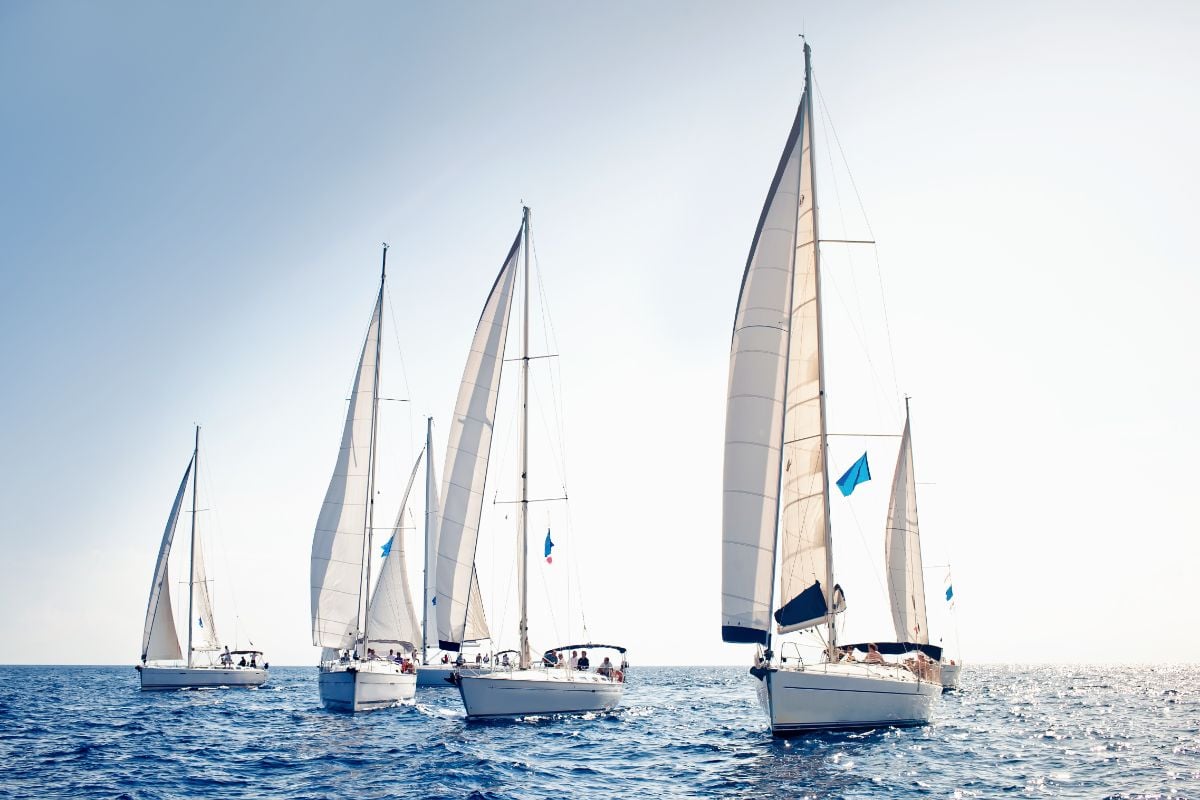 The Marconi sail is a variant of the Bermuda rig that has been used in that country since the 1600s. The Marconi rigged sailboat has a similar sail and got its name during the 1899 America’s Cup Yacht race in New York City.

The Bermuda-rigged sail is easier to handle than a gaff-rigged sail and is lighter; one person can raise and lower this type of sail. This advantage allowed sailors to go venturing alone because the crew is optional, not mandatory, in a Bermuda-rigged boat. 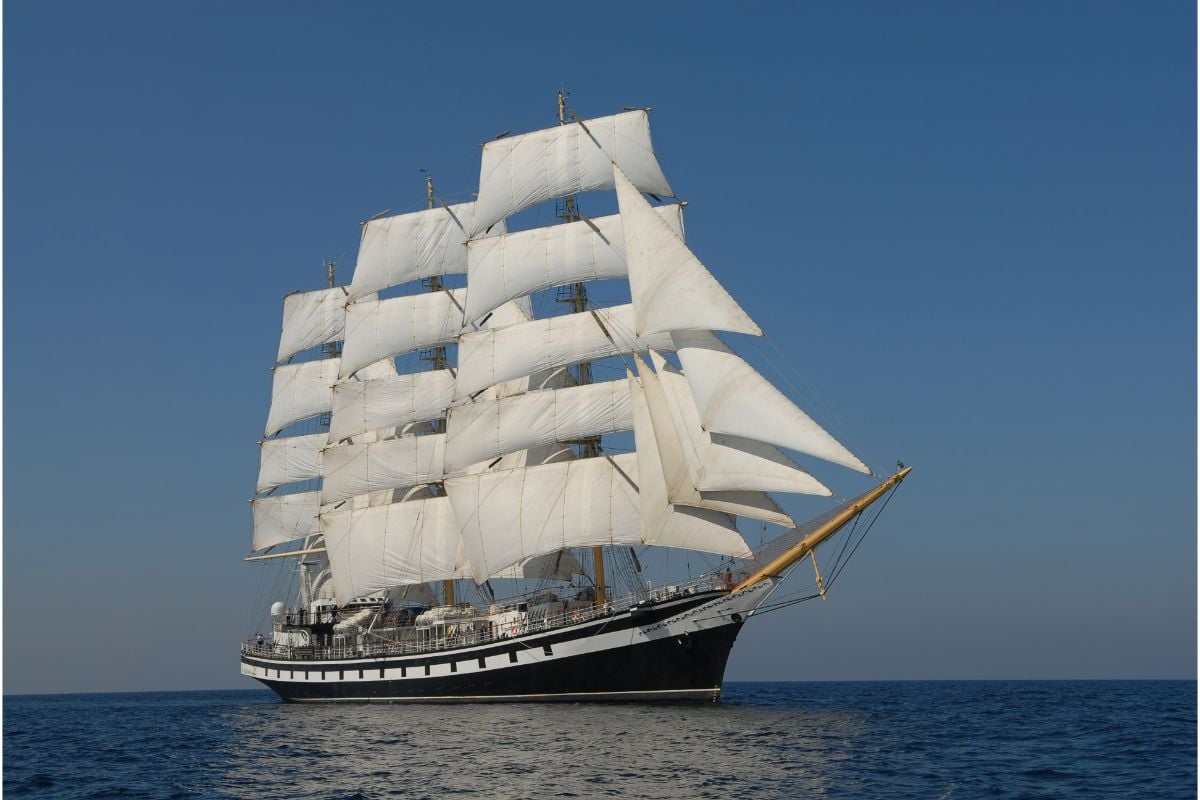 This type of sail was used on boats pre-1900 and afterward. Square sails have a top-mounted boom. This sail is trimmed by moving the two lower corners with lines leading to the deck. Unfortunately, square sails, and the boats that use them, are not as efficient or as easy to handle as today’s sailboat rigs. 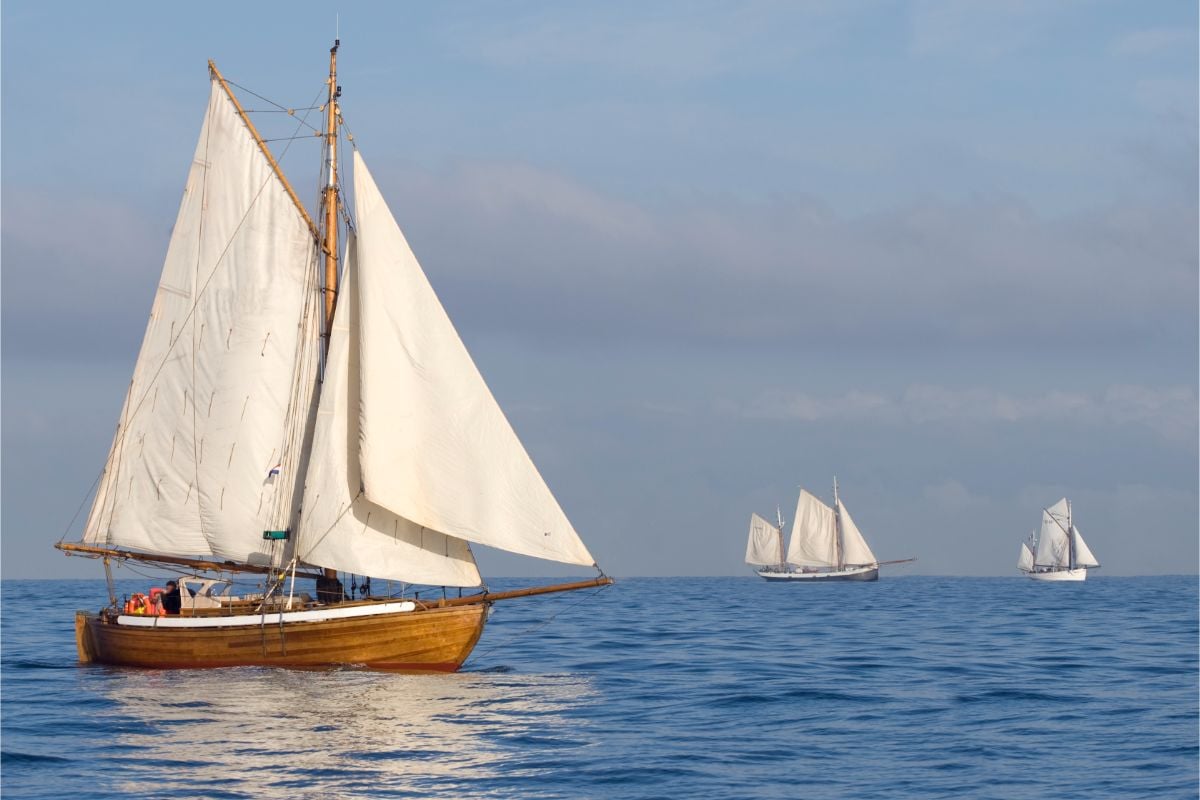 See also  Where to buy a used boat? These are all the online and offline resources I used

Other sailboats with two masts include the Schooner and the Brigantine (brig). However, on these rigs, the aft mast is taller than the foremast, or almost the same height. 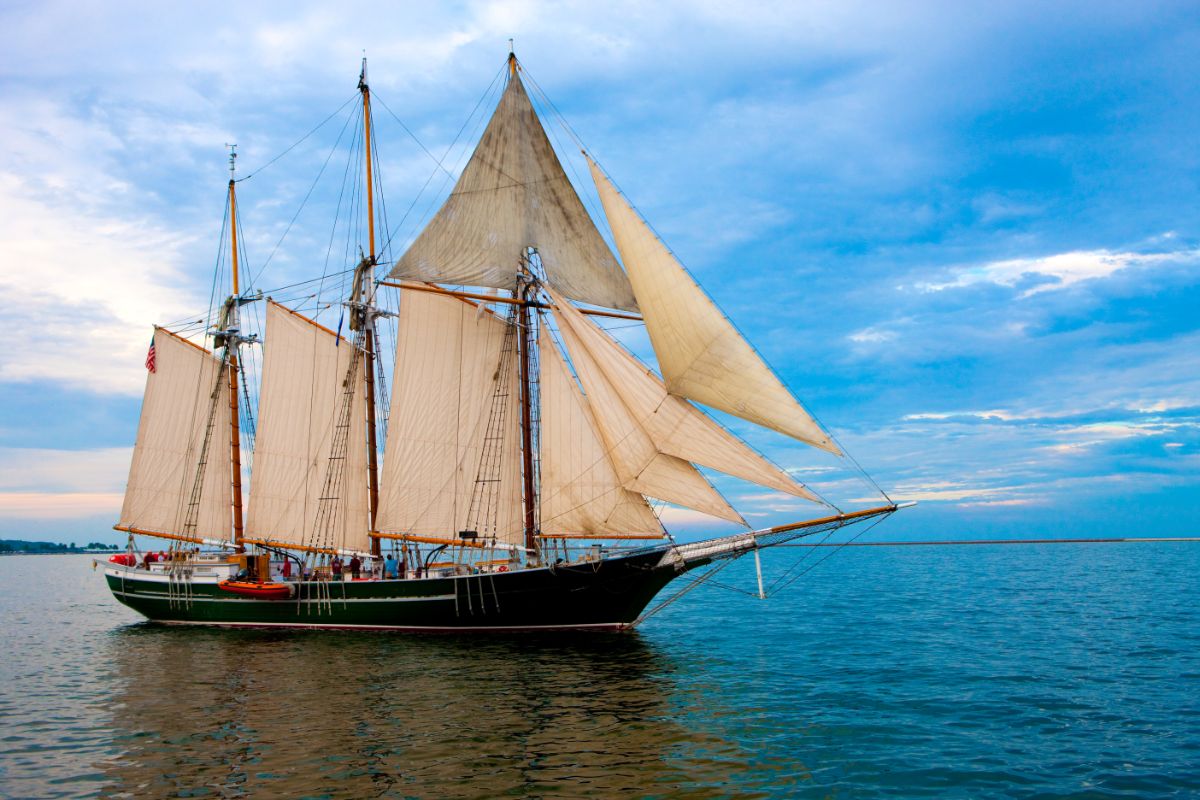 Topsails are used on gaff-rigged sailboats and are set above the sail’s top gaff. They fill the upper triangular area above the main and add sail power. However, topsails aren’t limited to gaff-rigged boats.

Many Marconi rigged ketches and yawls will often set a topsail above the mainsail for more power, especially in light air situations.

7. Foresails have many different names and purposes. 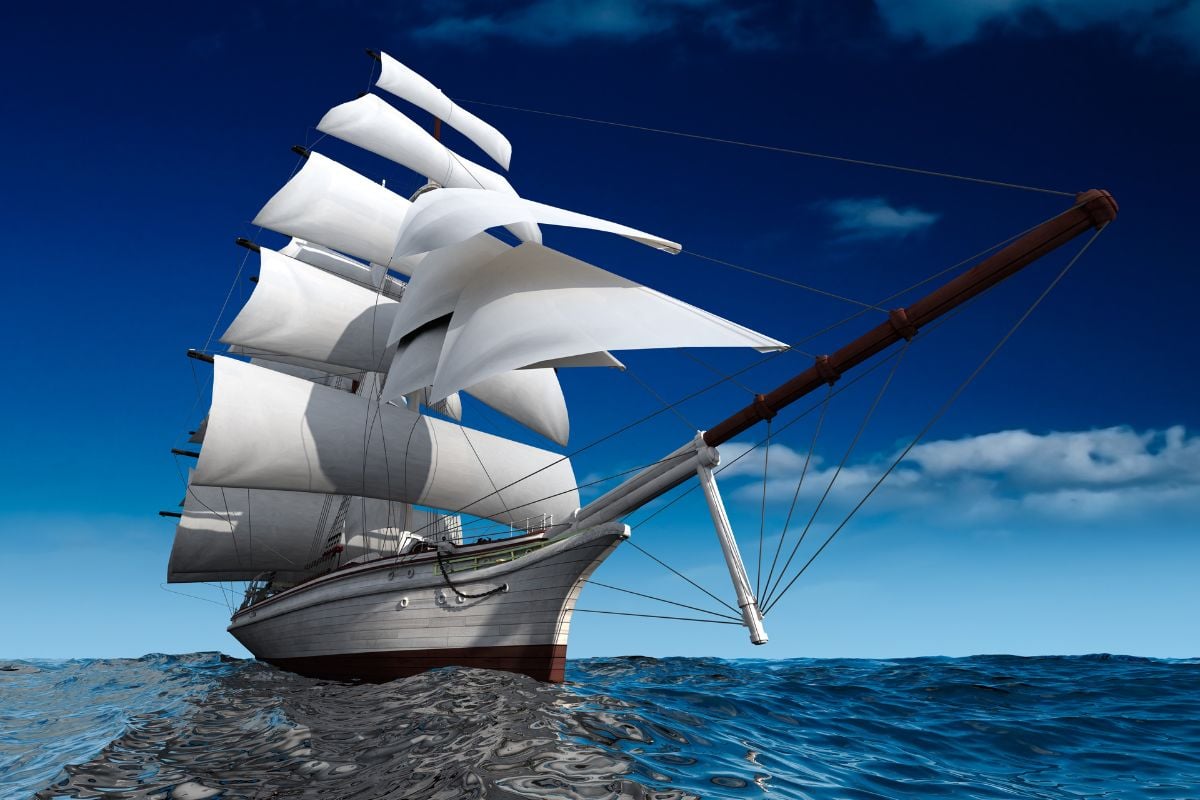 The foresail triangle is where all the action has been on the innovation of sails. However, the mainsails have changed over the years, but not like foresails.

The advent of full batten sails, and systems that raise and lower sails with the push of a button, has made sailing easier.

Foresails, on the other hand, (the sails in front of the mast) have evolved into many fantastic purposes.

They will continue to evolve as people push the edges of their speed on the water-powered purely by the wind.

Most modern sailboats have one, two, and sometimes three foresails attached to their roller furling systems. This configuration of a sailboat will let you take down one sail and unfurl another while on the fly.

Roller furling sails, from the jib to the mizzen, are wonderful innovations. Roller furling started on headsail and has moved to the entire rig on many boats. The addition of roller furling to main and mizzen sails has caught on and remained popular for a good reason.

A wet foredeck is scary, and the ability to furl and unfurl your sails from the cockpit or cabin makes sailing easy for almost everyone. In addition, these advances have allowed sailors of advanced years to stay on the water longer. 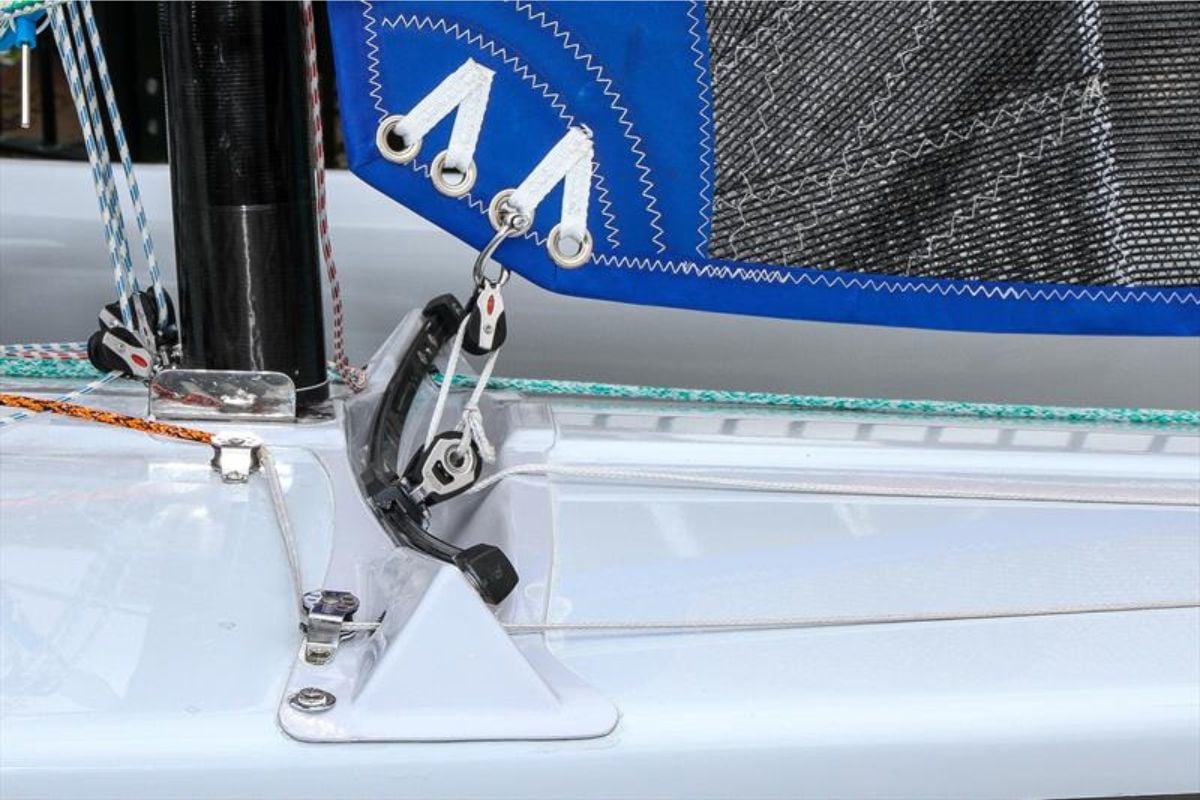 Jibs are set in front of the mast and often have a boom. With a boom or not, self-tacking jibs eliminate a trip to the foredeck. When you change course, and if it is fitted with a boom, you have a lot of control over it. Also, most jibs fit within the fore triangle, eliminating them from being snagged on the rigging as you go from one heading to the next.

Jibs can be lightweight for light air, minimal, and very strong when the wind picks up. Storm jibs are heavily built and may not be much bigger than a small tablecloth. When you need to put this sail in action, you have reached the point of riding it out, whatever ‘it’ happens. 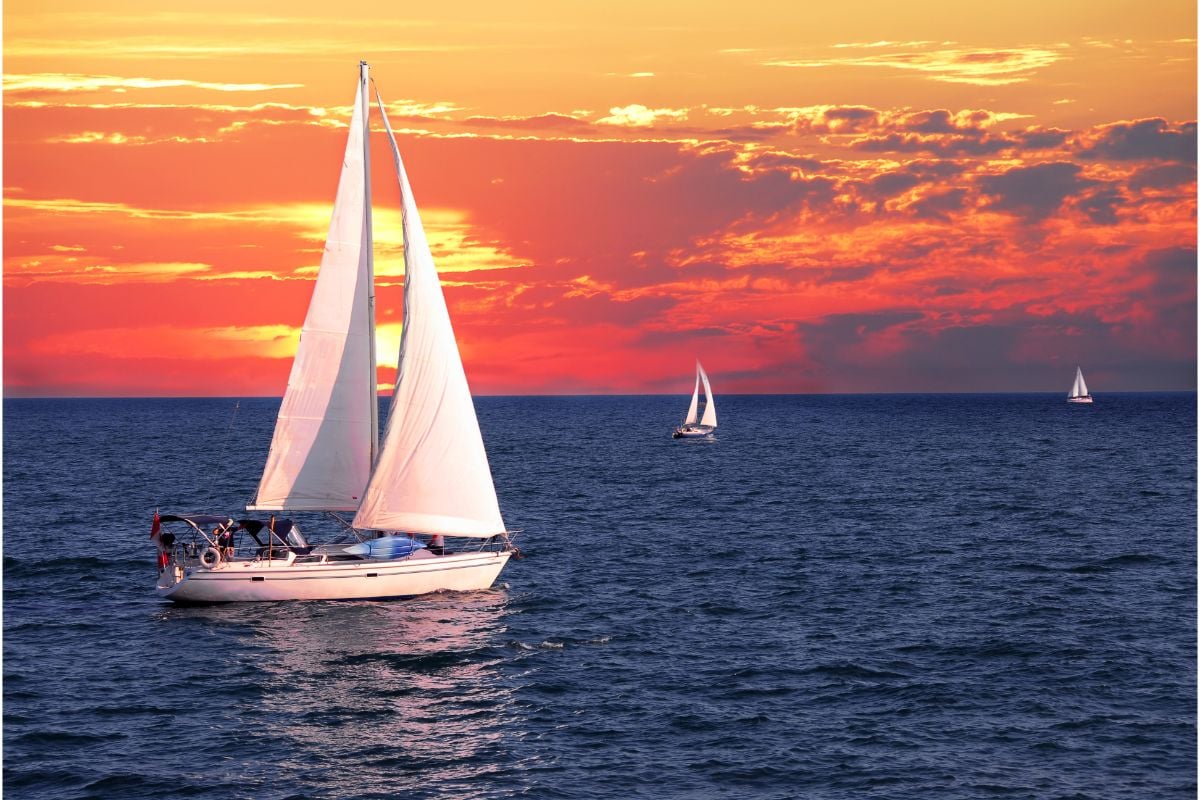 Jib tops have a foot well above deck level, and are used in conjunction with a second jib, usually the staysail. You can also use a jib top with reachers and spinnakers.

Their high foot (the bottom of a sail) keeps them clear of the deck, leaving you free to work the foredeck.

Keeping a jib top sail flying when setting other sails can keep your boat from stalling while raising and lowering spinnakers, reachers, or a Code Zero.

Genoas are jibs, too.

The Genoa is also a headsail and is called a jib, too, because they are. However, some genoas are so big they will overlap your mainsail. Genoas are described by the amount of overlap of the mainsail it covers or its purpose, such as a genoa staysail.

They can have a 50 to 100 percent overlap of the mainsail, and you can use a genoa on sailboats in light to moderate air. Genoa staysails also remain inside the forestay, and you can use them with other genoas and Code Zero sails.

However, over the years, sailmakers have designed sails for any wind. As a result, there are very lightweight sails for days void of much wind and heavily made sails that can keep your boat stable in a blow. 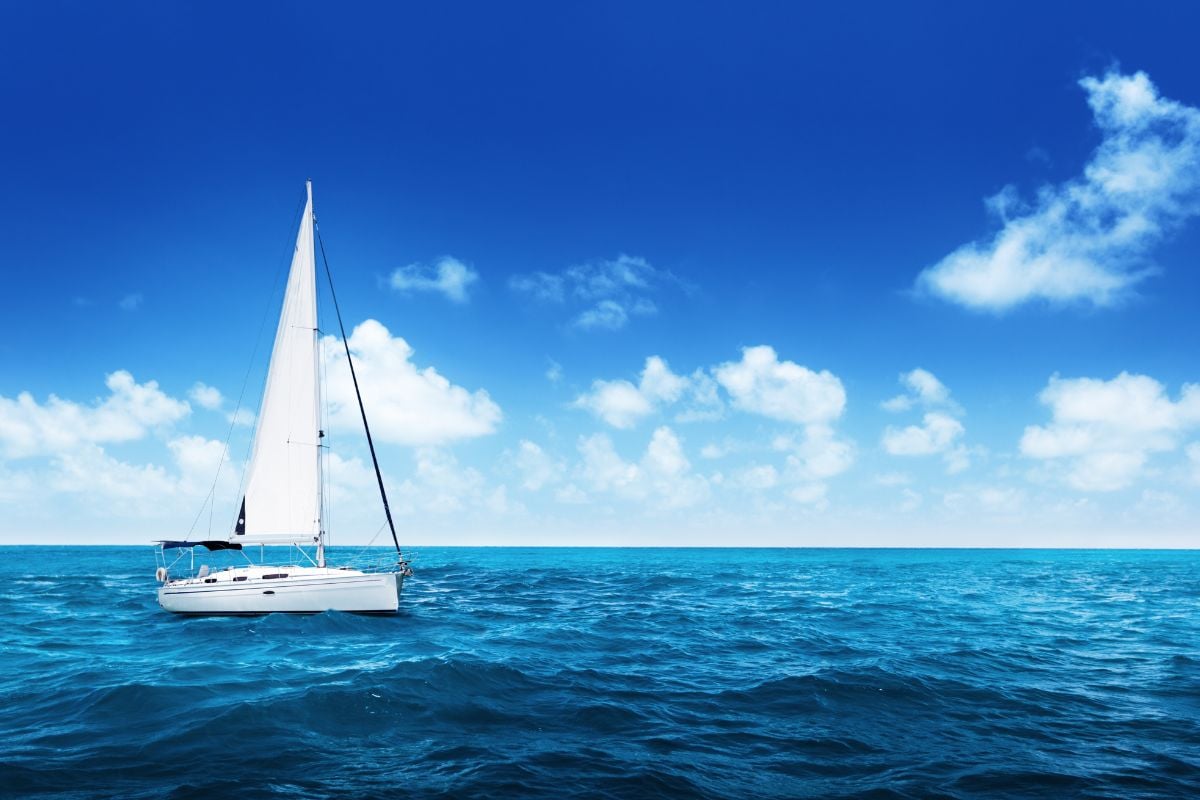 Cutter-rigged sailboats have two headsails. The sail set most forward is the Yankee jib, while the aft foresail is the staysail. Modern sailboats often have second and third halyards that give you many options when choosing what headsail to set.

These sailing innovations have effectively turned most modern sloops into cutter rigs, giving you a great deal of control over how you want and need to sail your boat.

The flying jib gets its name because it is much like a spinnaker, so it flies before the wind. So, naturally, they are set in front of the forestay, often on a fixed or retractable bowsprit.

You can use a flying jib with a spinnaker pole to help it keep its shape, especially in light air. The flying jib will give your sailboat a speed jump, whether you are running downwind or on a reach.

Another type of foresail, reachers, are very lightweight and are typically used in winds between one and 15 knots when close-hauled and driving into the wind. However, it is also suitable as a downwind sail in light air. 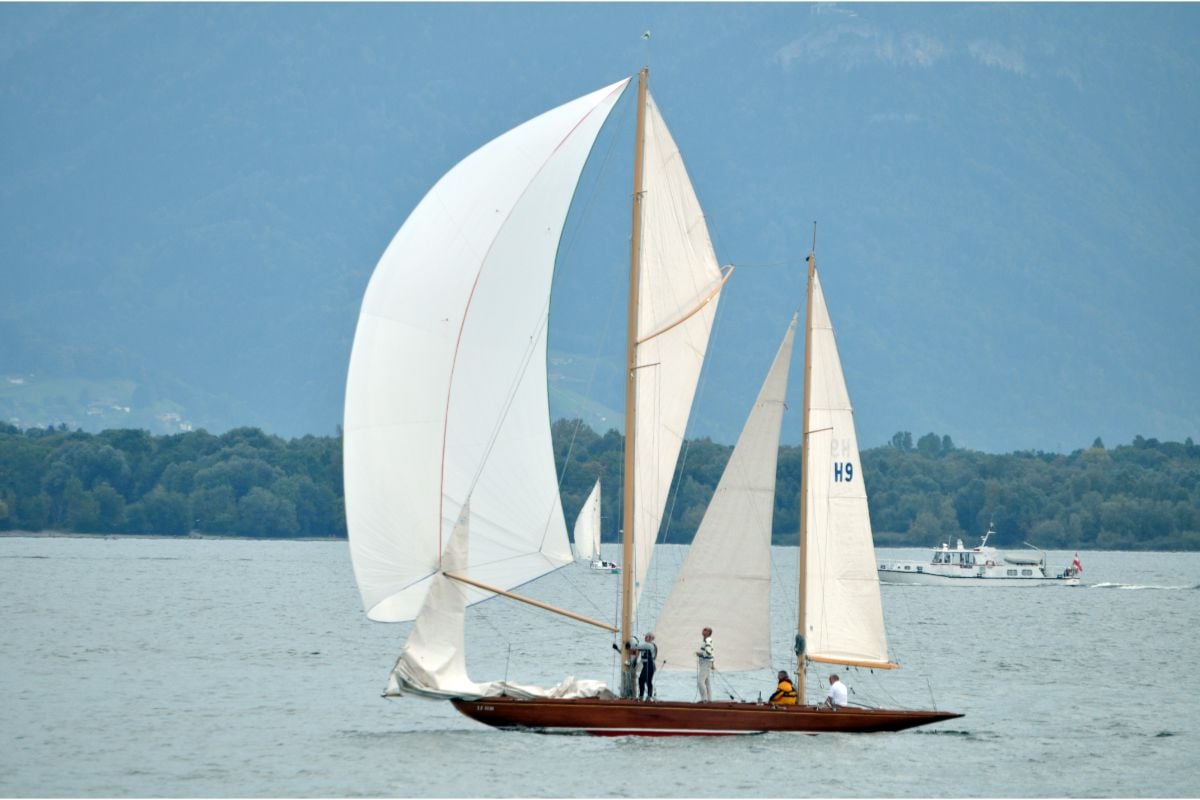 This is the most easily recognized sail beside a typical main and jib. The spinnaker is the big ballooning sail that boats use to sail downwind. This point of sail is called ‘running’ and can take some boats to planing speeds.

Like spinnakers, Code Zero sails are exclusively for downwind sailing. Drifters and genoas can be used downwind also. However, they are not as efficient because they attach inside the fore triangle and can’t reach as far to the left or right when sailing before the wind.

Like spinnakers, Code Zeros are set outside the fore triangle, and you can set them with a spinnaker pole. The sail is designed to catch every puff of wind possible. Code Zero sails are designed to fill the gaps of the dedicated downwind spinnaker.