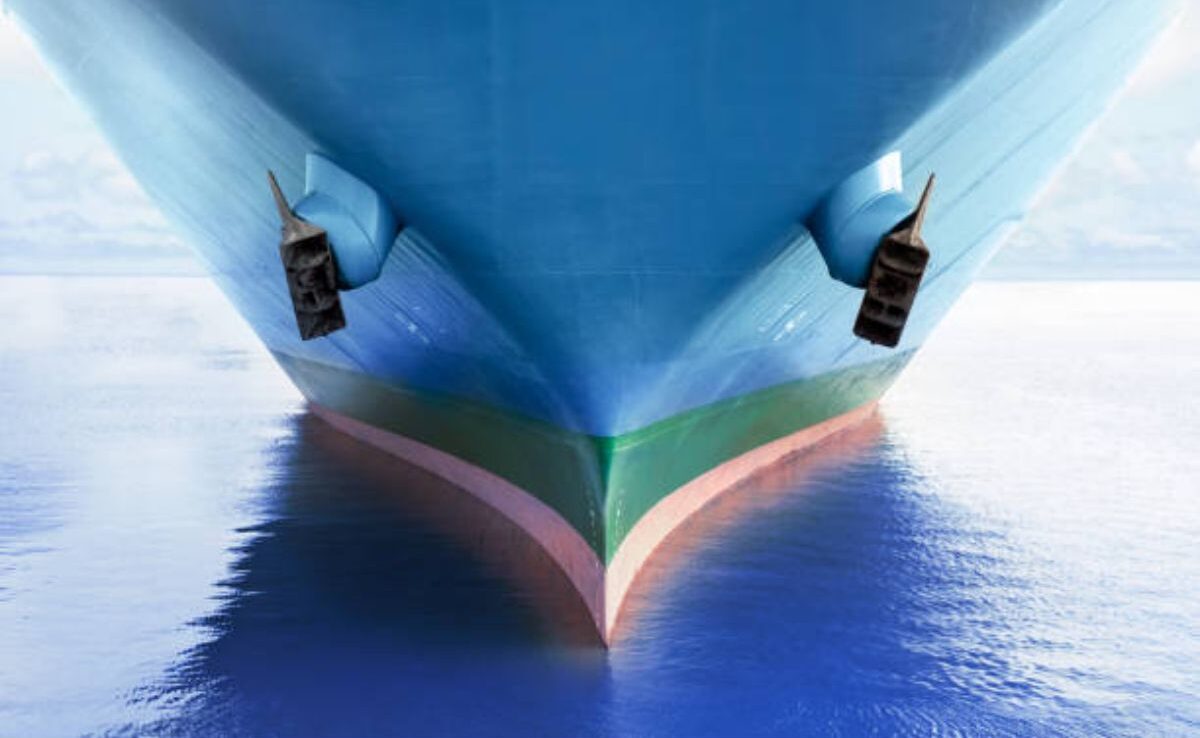 Since the first person floated down a river on a log, many types of boats have evolved. Even dugouts made from logs are a hull type. They have round bottoms, as do most canoes. Understanding the pros and cons of each hull type can help when looking for a boat to purchase. Each hull type has a different purpose and a different quality of ride.

Of all the boats designed and built since the first downriver ride on a log, there are only seven types of boat hulls.

Contents show
Monohull boats
Multi-hull boats
Fast boats have Planing hulls.
Slower boats often have displacement hulls.
1. Flat-bottom boats can be sail or power boats.
2. Round bottom boats can be prams or ocean-going yachts.
3. V-bottom boats are the most common type of boat hull.
4. Cathedral hull boats — are not multi-hulls
Multi-hull boats
5. Catamarans have two hulls.
6. Trimarans have three hulls.
7. Pontoon boats vs. Tritoon’s
FAQs about the types of boat hulls
Which type of boat hull is the most stable?
How fast must a boat go to get on a plane?
Can sailboats plane?

Secondary to the hull type of a boat is whether the boat is a planing hull or a displacement hull. These two qualities affect a boat’s ride quality, speed, and how one will use the vessel.

Flat-bottomed and V-hulled boats are planning hulls. What makes it a planning hull is that somewhere between 15 and 20 knots of speed, the boat will get on top of the water, which can leave very little of the hull in the water. This feature makes these types of hulls faster than displacement hulled boats.

Because a planing hull is free of the water it displaces, friction is reduced between the hull and water. Flat hulls and V-bottom boats gain lift from water due to their hull shape.

Cathedral hulls and their modified variants can also be very fast. Many bass boats have hull designs that skim over the top of the water at high rates of speed.

The Allison XB-2002 holds the record for the top speed of a bass boat. It has reached over 108 miles per hour with its highly modified cathedral hull type, potent outboard motor, and specialized propeller.

When under power, they will not sit on top of the water like a planning hull. Instead, they sit down in the water and drive through it.

Most canoes have round bottoms, while skiffs and Jon boats have flat bottoms. From this point, designers take many liberties with the basic designs of boats and make them for every purpose imaginable.

Each type of boat built, including bass boats, powerboats (of all kinds), sailboats, houseboats, and trawlers, use a different type of hull. Boat designers and builders use the other variants for particular purposes.

1. Flat-bottom boats can be sail or power boats. 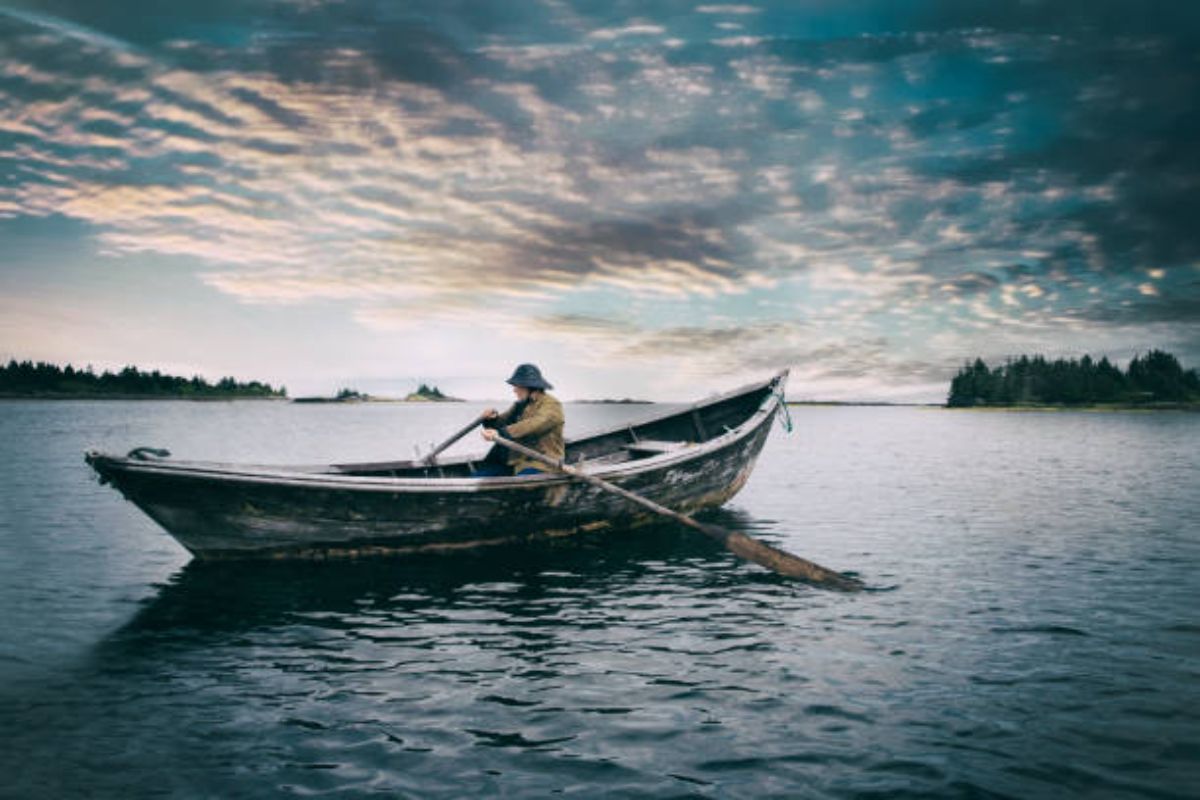 Flat-bottom boats are typically very stable. Due to their design, they will tip, but not like a round-bottomed boat will.

A flat bottom boat is also the least expensive and is the most accessible hull type to get up on a plane. However, when the water becomes rough, a flat-bottomed boat will ‘pound’ into the waves and become a wet ride.

A design that uses the attributes of a flat-bottomed boat, and adds them to a round-bottomed canoe hull, making it more stable than the original designs, is the Gheenoe. Its design is an excellent example of boat designers thinking outside the typical log.

Squaring off the stern (back of the canoe), flattening the bottom of the hull, and adding two long sharp-angled strakes down the sides created a narrow yet very stable design.

Unless a flat-bottomed boat is over twenty feet long, has a closed bow, or is a sailboat with a weighted keel, this hull type is better for excursions on rivers, lakes, and bays.

2. Round bottom boats can be prams or ocean-going yachts.

Boats with round bottoms are displacement hulls and include dinghies, sailboats, canoes, and trawlers. Usually sitting lower in the water than flat-bottomed boats, their ride is not as jerky and harsh but more of a rolling motion.

Boats with round bottoms include sailboats, trawlers, yachts, and other vessels designed to go slow. Round bottom boats used for sailboats have weighted centerboards or keels.

Trawlers, yachts, and other vessels with round bottoms will have a keel for several purposes. The lower area in boats is used to place fuel, water, and waste tanks and helps keep them stable.

3. V-bottom boats are the most common type of boat hull. 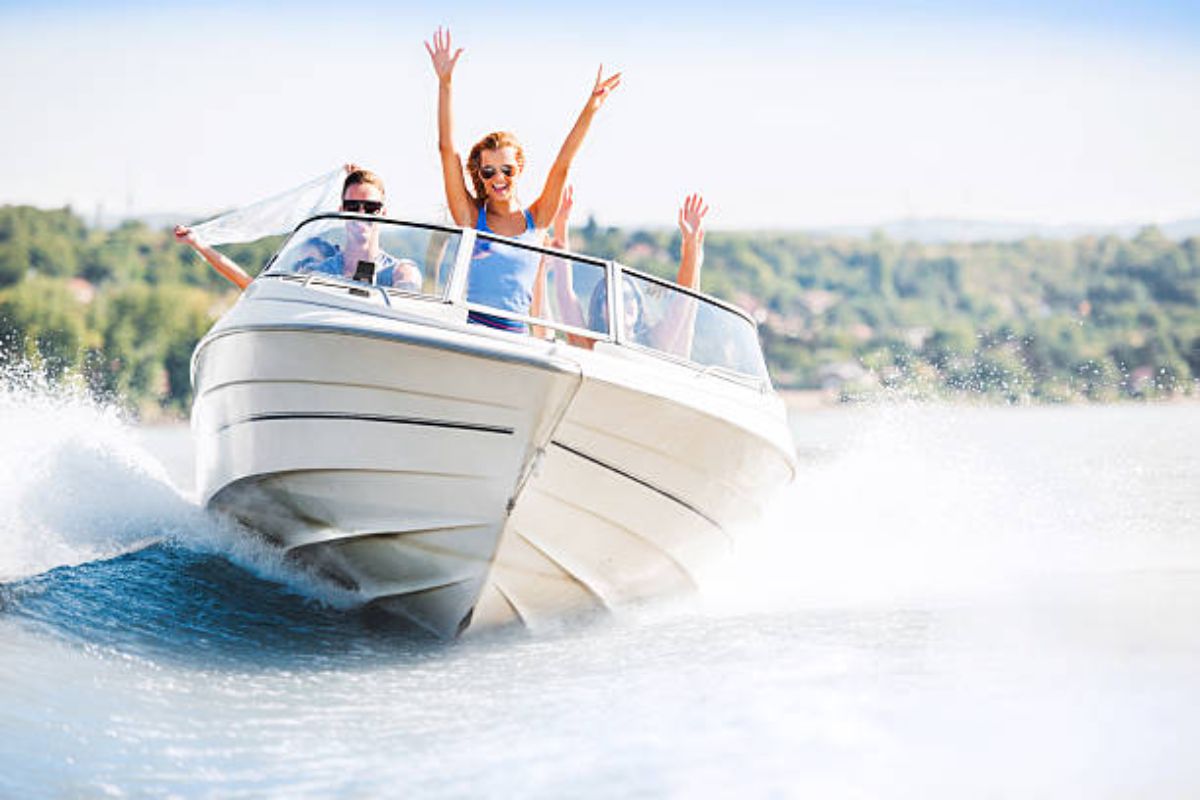 V-bottom boats are the most common hull type and can have a shallow or deep V hull. They are planing hulls and are used for powerboats, mainly. How deep the V-hull of a boat will be, depends on how owners will use this type of boat.

Boats with a deep V hull carry the V from bow to stern. This sharply angled wedge shape is used on ocean-going powerboats.

Smaller powerboats may have a V-shaped hull. However, the angle of the dead-rise is not as pronounced. The ‘dead rise’ of a boat’s hull is the angle of the wedge shape down the center of its hull.

A V-hull boat splits the waves, driving them instead of pounding over them or rolling through them. A powerboat with a deep V hull can take on oceans if it is large enough. Smaller V-bottom boats are often drier to ride in than flat-bottom boats.

V-bottom boats are faster than their counterparts and can be less comfortable when the waves roll. Therefore, even though they split the waves as they drive forward, they can pound at speed like a flat-bottomed boat. This is due to the fast forward motion slamming your boat into the waves they go through.

4. Cathedral hull boats — are not multi-hulls

I call these hybrids because they take the attributes of a trimaran and blend them with a V-type hull, making the boat more stable when it is at rest. However, the outer sponsors look like two more hulls when the boat is coming at you and like a typical V-hull boat as it moves away from you.

This design was first used on the Boston Whaler 13-footer in 1956. The designers, Fisher and Hunt, first built a boat with three distinctly separate hulls. However, that design was a ride that was too wet for comfort.

Since it did not work as planned, they filled in the spaces between the rear hulls, which gave it a monohull stern and a bow with the appearance of three hulls.

This boat type is often lumped into the multi-hull category of boat types. However, boats with cathedral hulls and those who use a modified version of this type of boat hull are mono hulls. This hull type has one hull, although it may appear to have three.

You will often see this hull type on bass boats, heavily modified from the original Boston Whaler design. The modifications made to the cathedral hulls can improve the boats’ performance, speed, and maneuverability. In addition, it is a design used on houseboats and small boats because the setup is stable at rest.

Related: What is a Cathedral Hull on a Boat? 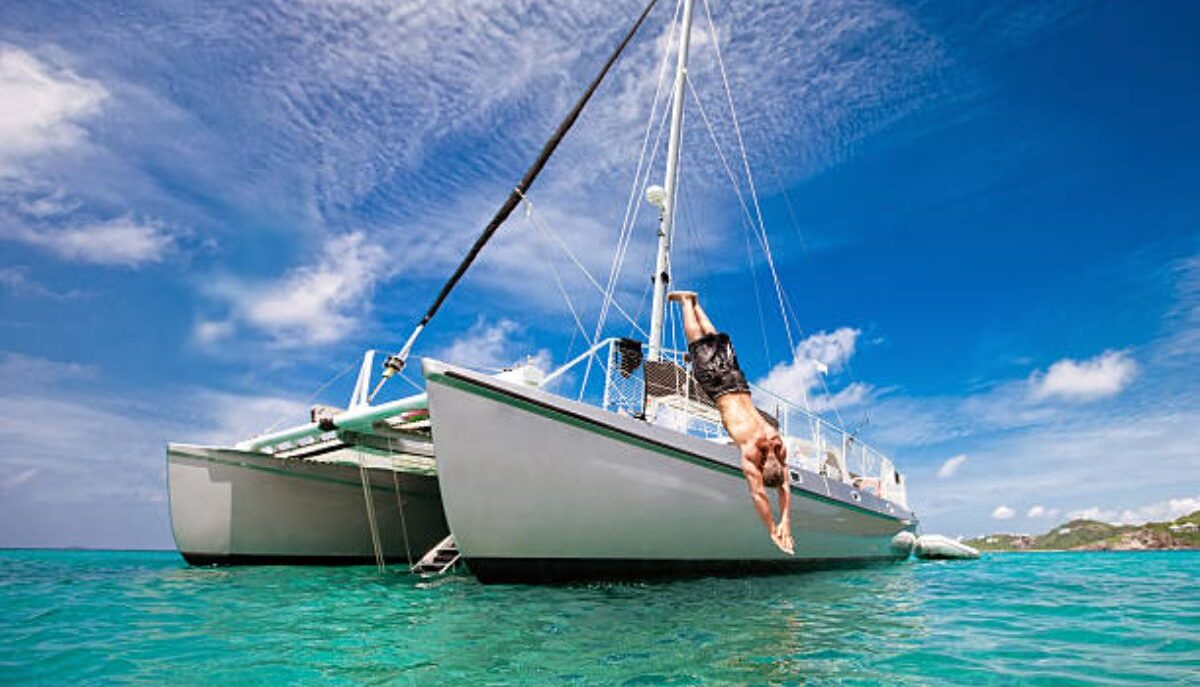 Multi-hull boats have two or three distinctly separate hulls. Crossbeams connect the hulls, and some have a hard-decked cockpit, while smaller boats have a trampoline that helps tie the boat together and give you a place to sit.

Multi-hull boats can have V-type, round, or flat-style hulls. There are multi-hull power and sailboats, and many people will say they are the most comfortable hull type.

Catamaran powerboats and sailboats have two hulls. On power catamarans, the hulls often have a deep V and an engine in each of them. This configuration can offer a better ride than V-hulled boats when underway and at anchor.

The same goes for sailing catamarans; two hulls offer more stability than one. In addition, larger cats generally have two engines, which is another safety feature whether you have a power or sailboat.

Small sailing catamarans are prone to capsizing; however, most do not have a cabin or solid deck. Instead, they have a trampoline that sheds water, and it is a feat of athleticism to get them sitting back on their two hulls if they are knocked down.

Larger catamarans can capsize, too, just as any boat can on the water. However, they are not as prone to mishaps as their smaller siblings. They are a very comfortable platform for cruising or even living aboard.

See also  How are Boats Measured? 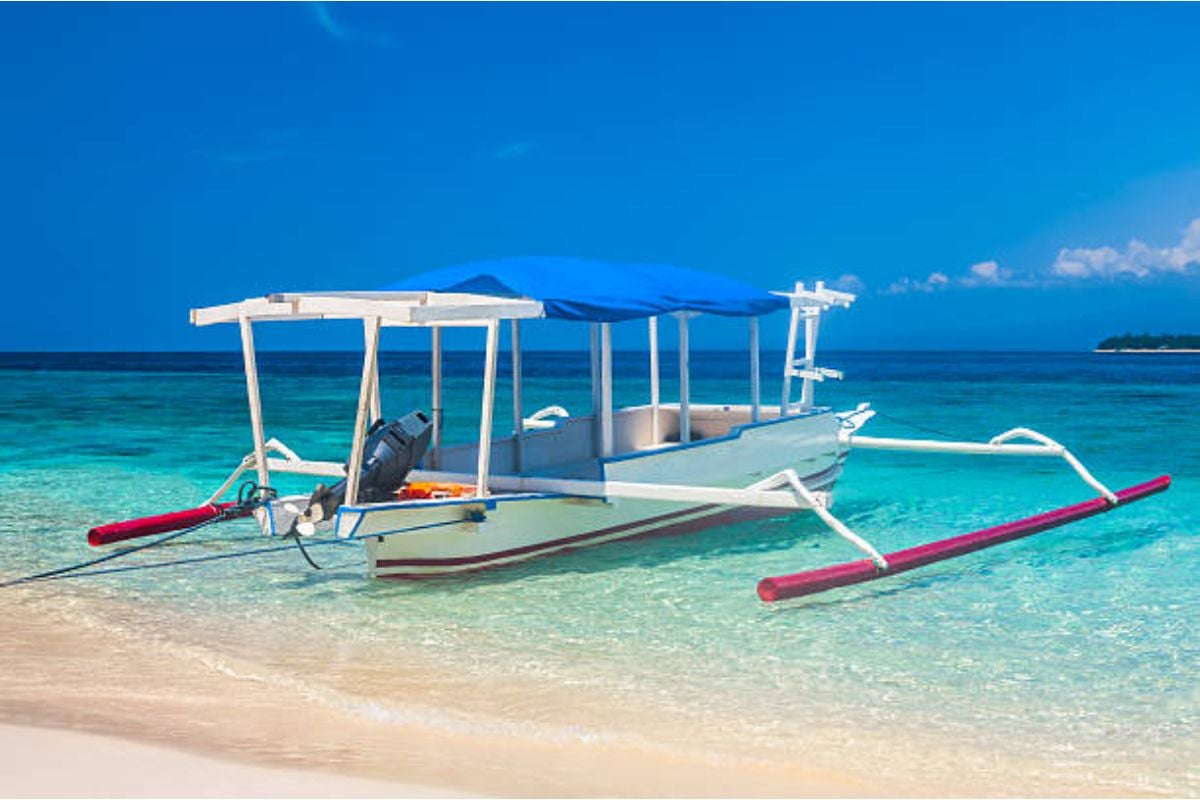 Boats with three hulls that are not pontoon boats are trimarans. Most trimarans use sails for their propulsion. The hulls are connected the same as on a catamaran, and the hulls are called amas. The cross members that help tie everything together are akas.

A great example of a small trimaran sailboat is the Hobie Adventure Island. It uses three hulls, a sail, and Hobie’s unique pedal, a paddle system of propulsion. Therefore, it is a hybrid-type boat, but the little Hobie is a trimaran first, with multiple ways to propel it through the water.

There are a few production trimarans you can pull behind a car and set up when you get to your chosen body of water. These boats are a bit larger than the Hobie.

On the larger side, Neel catamarans build entirely self-contained trimarans that can traverse the oceans. However, plan to spend more than you would on a Hobie Adventure, a lot more! 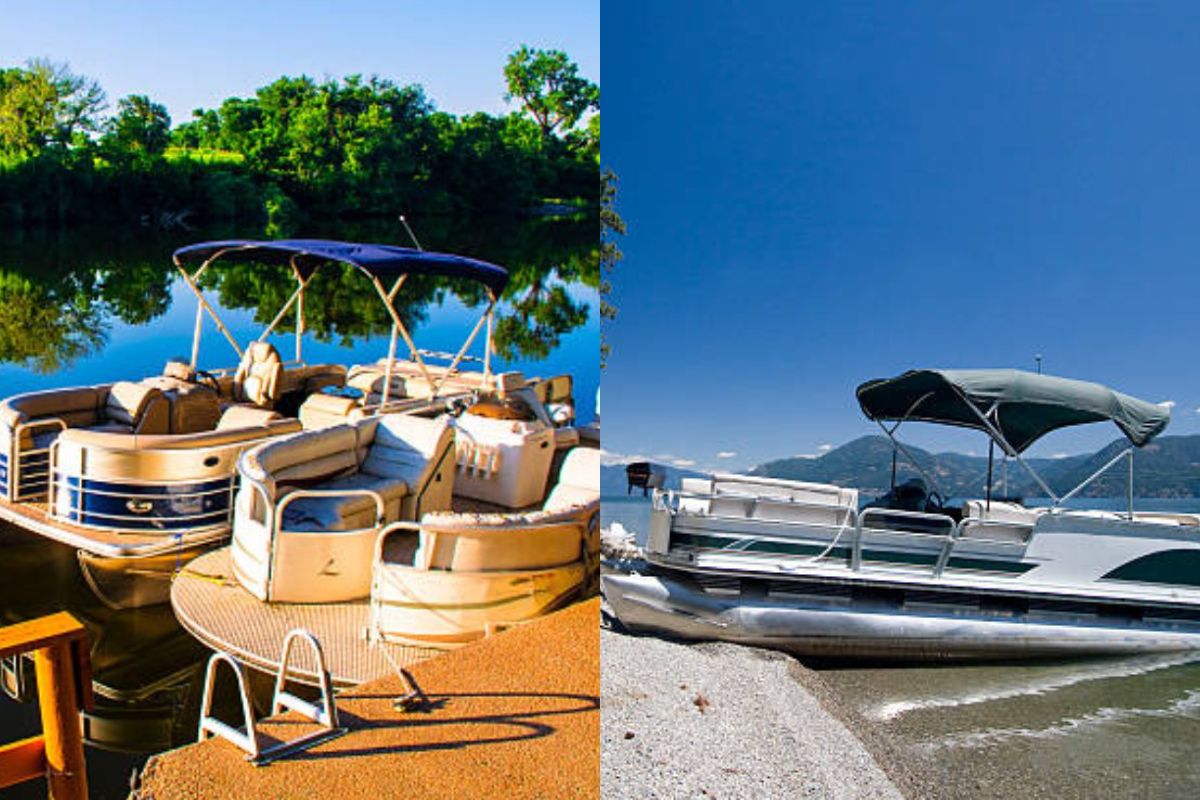 Although they are both pontoon boats, the traditional pontoon boat has two hulls that are either round or may have V or even flat hulls. They can be constructed from aluminum, fiberglass, composites, or a combination of materials.

Pontoon boats have a grid work frame that spans the pontoons and connects them into one unit. Then the framework is fitted with a deck. The ample space created offers a lot of area for fun in the sun while on the water.

Tritoons are also pontoon boats; however, they have three hulls instead of two. This attribute gives them more buoyancy and a larger weight capacity. That means you can have more powerful engines on a Tritoon than you can on a conventional two-hull pontoon boat.

Of the two, Tritoons are faster because you can put more power on three hulls than on two. After all, the three hulls can bear more weight. However, they can also be more expensive because many outboard motors can be as costly as the boat they are powering. So, adding a second one will cost you.

Adding an extra engine, or two, or three to any boat may give you more speed. However, it will add to the price of the boat you purchase and the cost of operating and maintaining your boat.

FAQs about the types of boat hulls 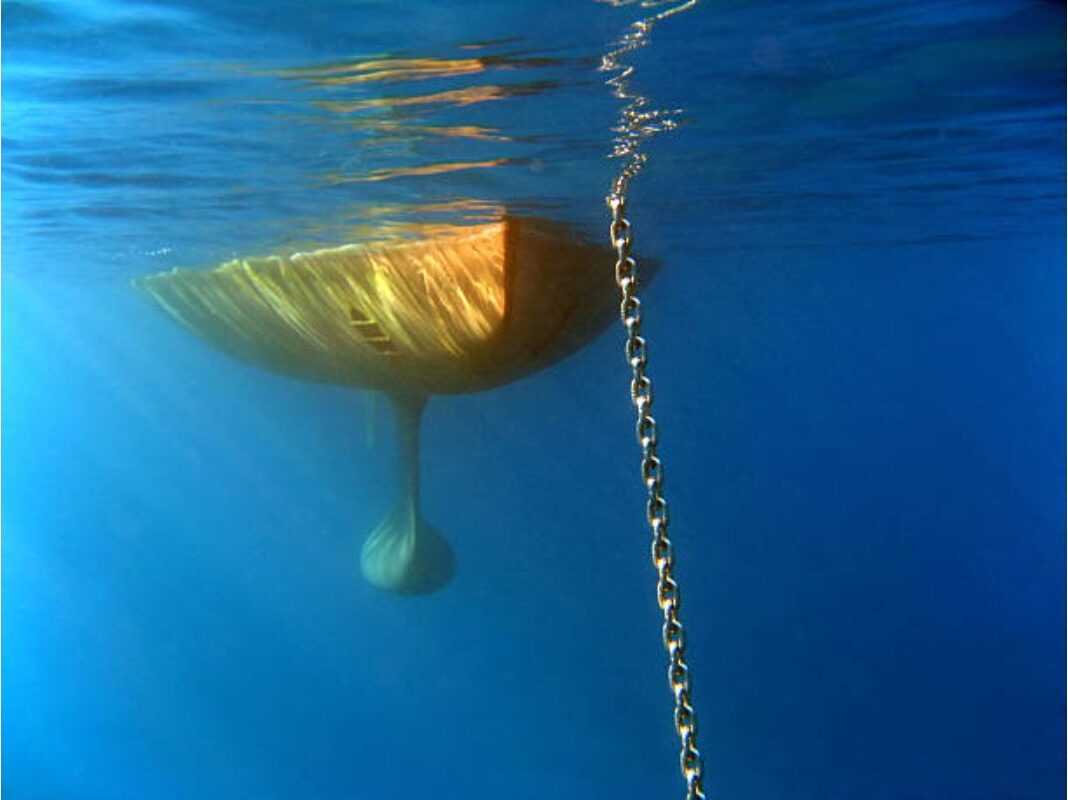 Which type of boat hull is the most stable?

Multi-hulls and boats with deep V hulls are generally the most stable.

How fast must a boat go to get on a plane?

Some sailboats can, if you can, get to a high enough speed and keep their hull in the water. The fastest sailboat in the world is the Vesta Sail Rocket 2, which reached 68.33 miles per hour in the Southern Ocean in 2012 and has held the title of the fastest sailboat ever since then.