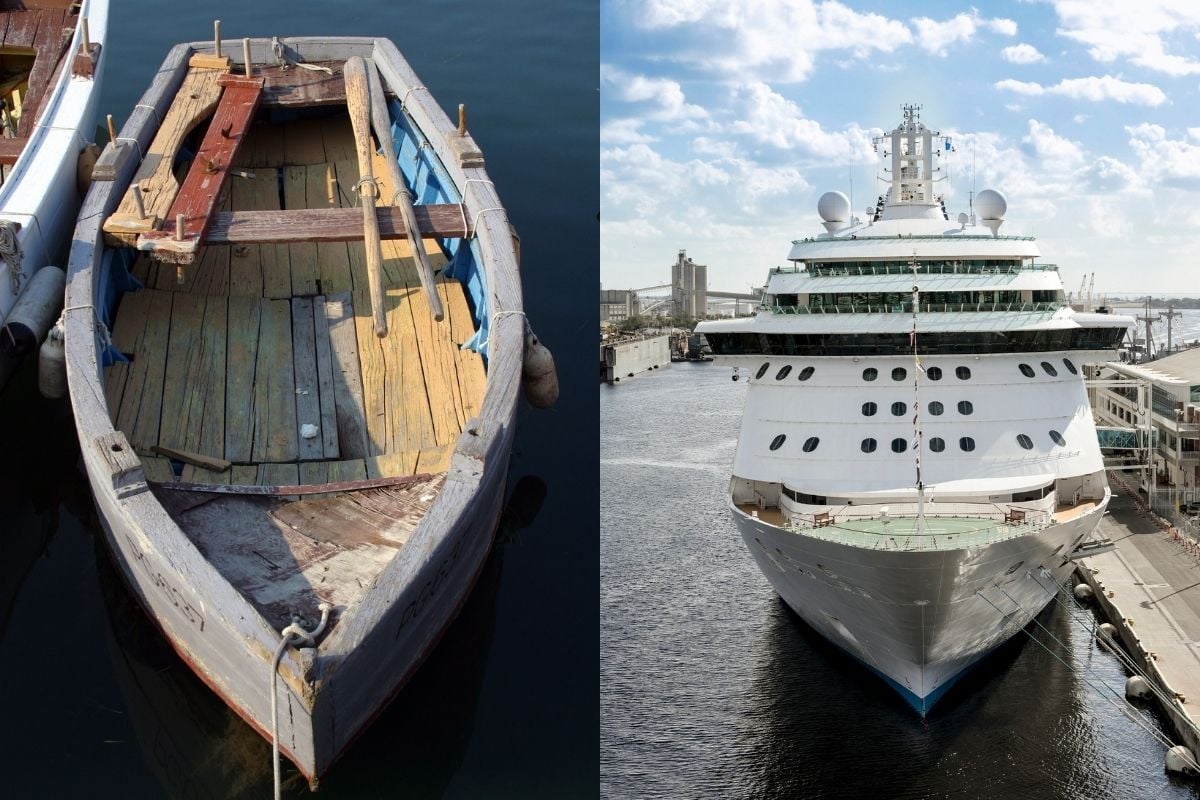 Asked what the difference between a boat and a ship was, an old naval captain replied, “A ship needs a captain and a crew of specialists, one  fool can operate a boat!”

Contents show
A Brief History of Water Vessels
Size Matters, Mostly
Where Does the Power Come From?
Who’s Running Things?
Where Does the Vessel Sail Best?
Construction Material
Main Purpose
Cost
Exceptions – Aren’t There Always?
In the End

A Brief History of Water Vessels 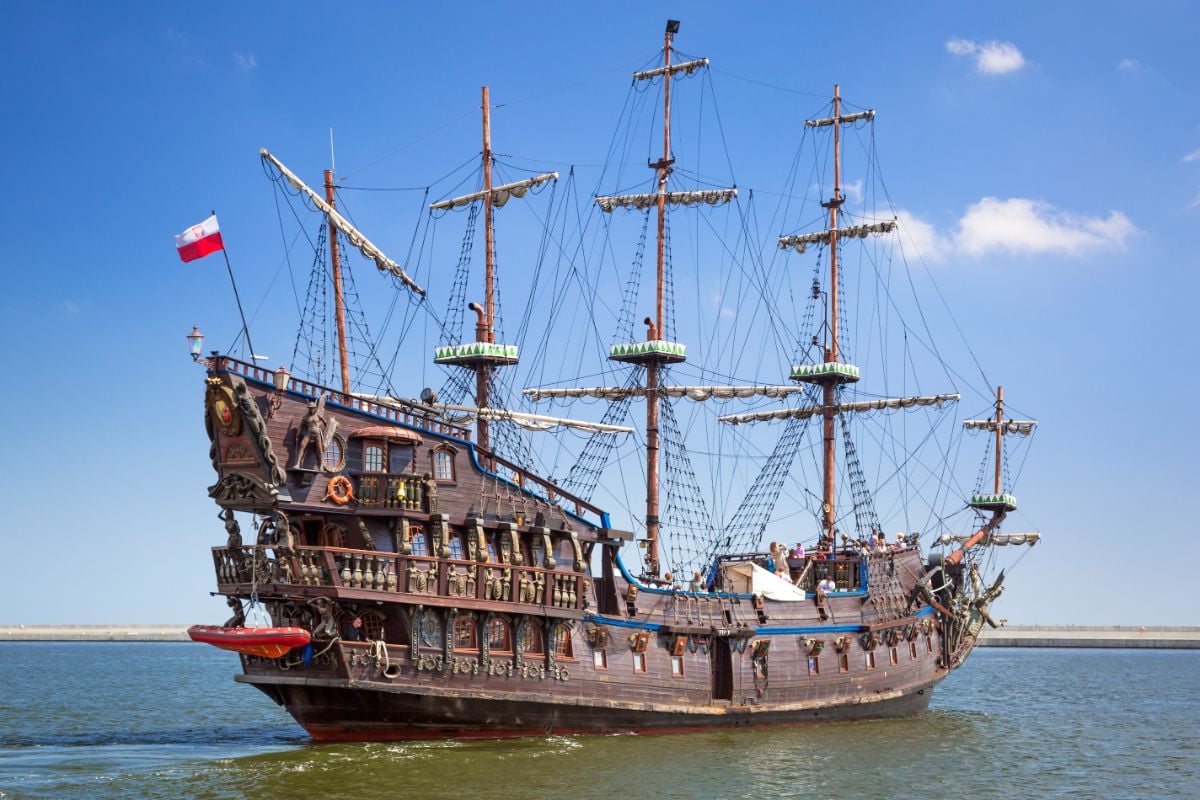 The history of boats goes back about as far as human history.  Log boats as old as 7000-9000 years old have been dug up by archeologists.  Near Kuwait, a boat that was constructed of reeds has been discovered and estimated to be 7000 years old.

It seems that man has always wanted to explore the waterways of the world. The ancient Egyptians constructed their boats from wood tied together with reeds. Boatbuilding skills continued growing and by 1588, naval ships could hold up to 800 people.

In the 19th century, the steamboat became considered a modern means of travel. Modern ships are made from steel, but many small villages in the world still use wooden and reed-constructed boats. We can only imagine what both ships and boats of the future will look like.

Another thing that can be noted is how many full decks the vessel has. Boats normally have only one full deck that covers the length of the vessel. A ship may have several, many that are located below water level.

See also  Do You Have To Give Your Boat a Name?

A ship is also designed so that the people on board have comfortable places to sleep. Some boats may have an area for resting, but few have full-blown quarters for long-term living.

Where Does the Power Come From? 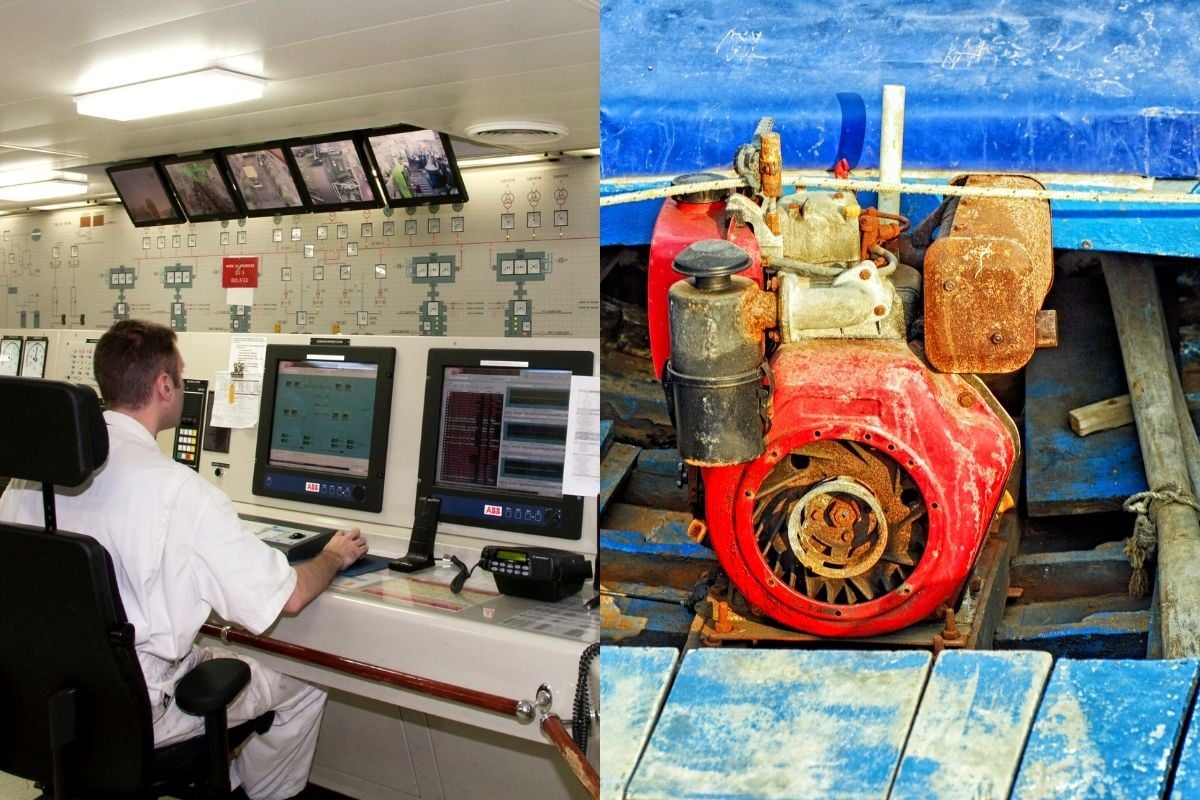 Boats are operated by various forms of power. The simplest ones are operated by human strength using oars. Others, like sailboats, can be operated on wind power, and still, others have a small motor that can often be started with the mere push of a button. Navigational equipment is minimal.

Ships’ engines are made up of many parts and require training to understand how they work and how to operate them. It takes many steps just to prepare the engine to start. Navigation on a ship requires a great many instruments that include not only compasses but weather-related gauges and many more.

Not everyone is able to understand what these instruments are saying or how to work them because they are very complex. 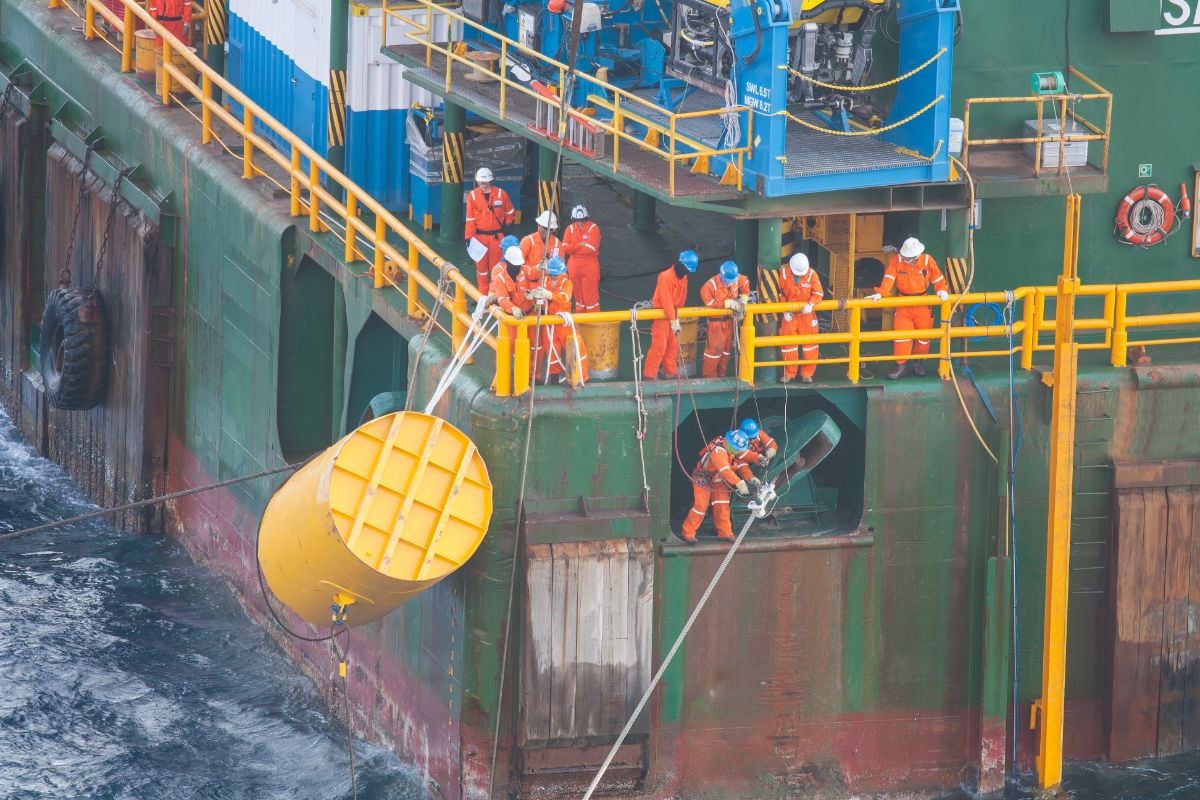 Here is one of the most important deciding factors when it comes to ships vs boats. Many boats can be operated by one individual. Others have a few people on board, some taking turns.

Most boat operators are well-versed in all the various operations of their vessels. Fishing boats may have a hired crew, but that crew is only utilized when necessary. Ships are run by a captain who has been specifically trained, and a dedicated crew that is ready to go at all times.

Often the crew has a uniform. Each crew member has a specific task, such as being an engineer. Some members may understand more than one task, but that knowledge will only be put to use in an emergency situation.

Where Does the Vessel Sail Best? 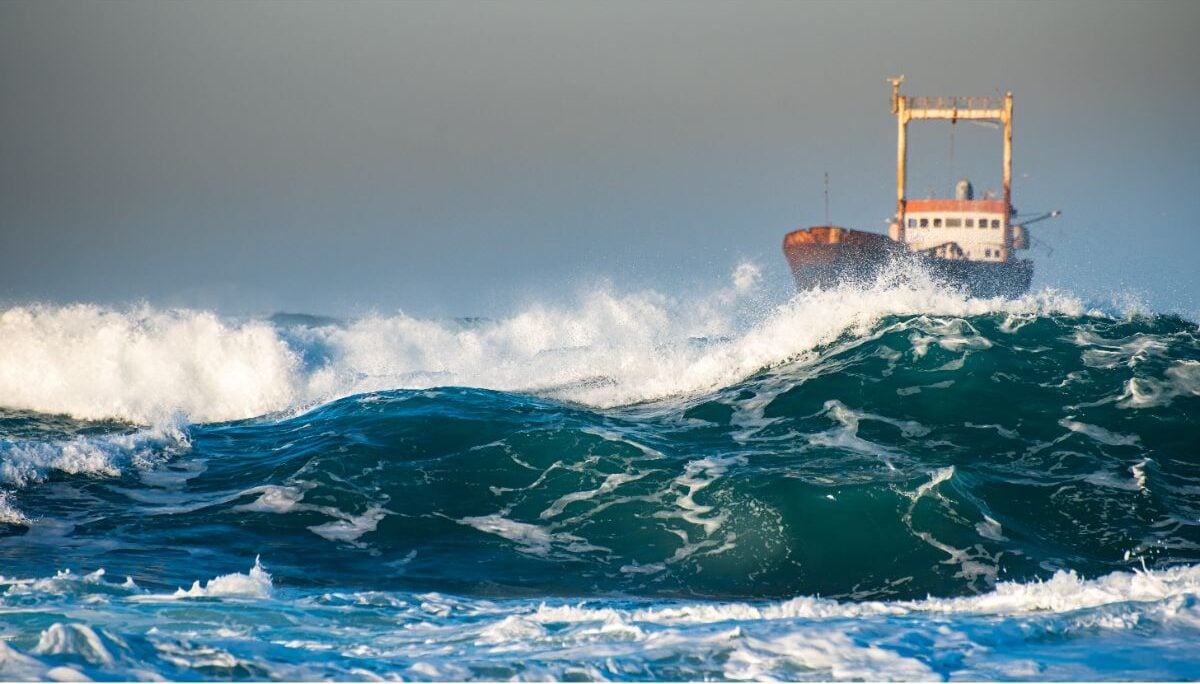 You may occasionally see a huge ship come into port or see explorers in small boats out on the ocean, but normally, boats and ships have designated areas where they are best suited for the area. Boats are designed for smaller bodies of inland water such as lakes and rivers.

They are also often found sailing close to the shoreline of the ocean, but they don’t venture too far out. Ships, on the other hand, are designed to withstand the strong waves in the ocean. Their huge size makes trying to navigate in shallow waters extremely difficult, and sometimes impossible.

One way some people define the differences is to say you can place a boat on a ship, but you can’t put a ship on a boat. That may be the case, but many ships that have ventured too close to shore have had to rely on small tugboats to pull them through. 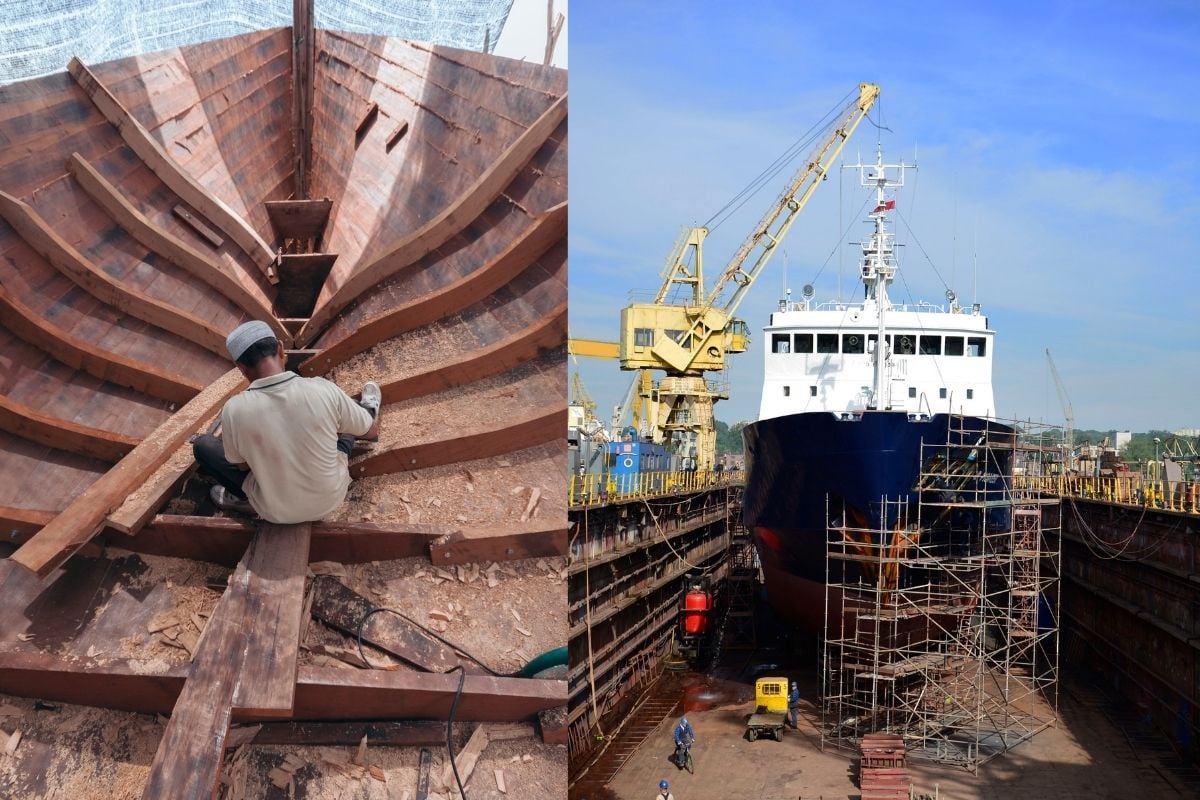 Boats have always been made from a variety of materials, most often things that can be found in nature, such as logs, vines, and reeds. As technology advanced, iron and steel frames became more popular. Today, the natural materials used for constructing boats still exist, but many are made from aluminum or fiberglass.

Ships, on the other hand, need to meet many regulations for structural safety. They are mainly constructed from welded steel to ensure their strength.

Another way you can tell the difference is to know what the purpose is. In the majority of cases, boats are used for recreational purposes and are defined by the type of boat they are such as fishing, sailing, water taxi, whale watching, etc. Ships, on the other hand, have specialized tasks.

They may be freighters, military, tankards, etc. With the exception of cruise ships, boats normally have a recreational purpose, and ships are for transporting goods or specially trained people who have a specific purpose. 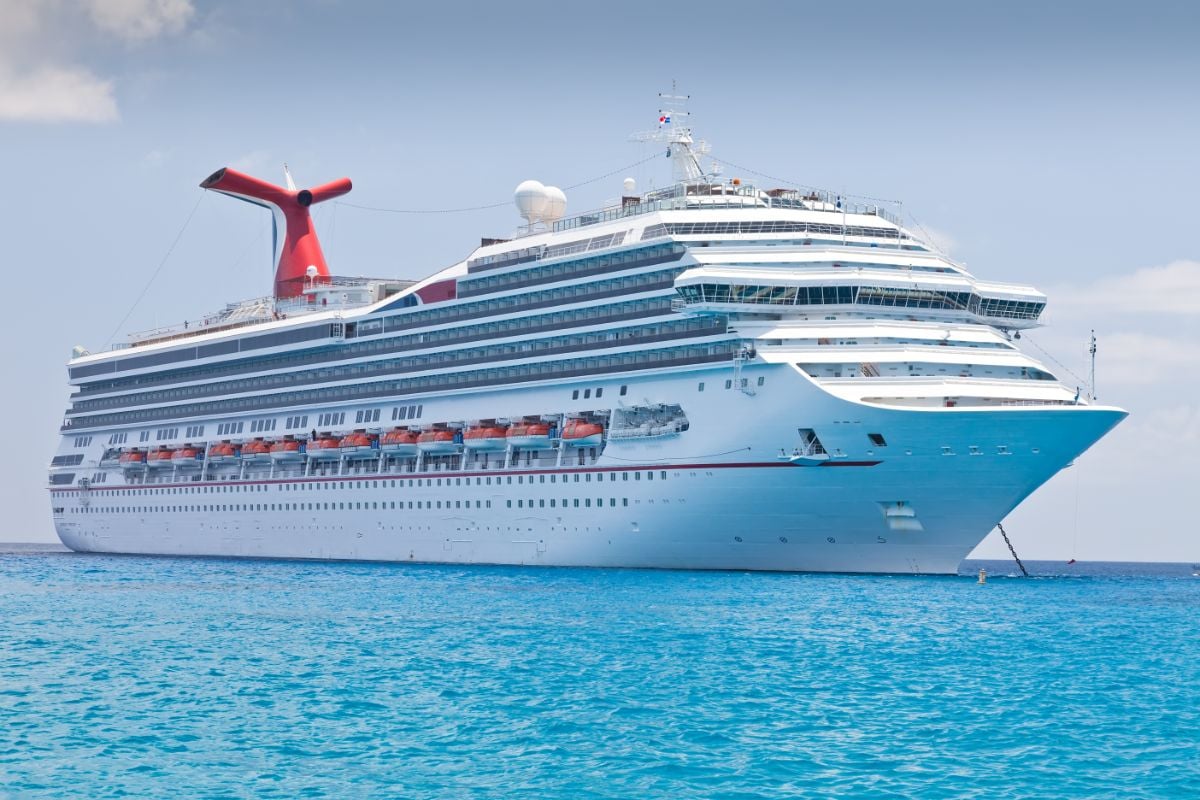 There is a huge difference in the cost between a boat and a ship. Boats range in cost from $5,000 to $250,000 depending on size, material, and whether the vessel is used or new. You will be spending far less on a simple canoe than you would on a luxury yacht.

If you have boat-building skills, you may even find the cost to be lower. A ship, however, requires a great deal more construction material and machinery. It must also meet certain construction standards. The cost of a ship is at least 700-800 million dollars.

Operating the two also shows a great difference in cost. Purchasing a ship is well beyond the means of the majority of the human population, while a boat can be made or purchased by even the poorest fishermen around the world.

Related: How Much Does a Boat Cost (to Buy and Ongoing Costs)?| 30 Different Types of Boats (Mega List of Boat Options)

It seems that something like this should be easy, but there are exceptions to this subject. For example, even the Navy itself can’t agree on whether a submarine is a ship or a boat. Cruise ships may be smaller than the stated size of a ship and they are for recreation, yet they are designated as ships instead of a boat.

Fishing boats often navigate the deep waters of the ocean, but they do not get the designated “ship” title. Despite these few exceptions, however, you can pretty much count on the above descriptions to help you determine the difference.

Now you have a pretty good idea of the differences between these two vessels.  If the vessel is huge, has a full-time crew consisting of highly-trained personnel, and spends the majority of its time sailing on the open waters of an ocean, you are looking at a ship.

If it is fairly small, holds only a few people, most without specialized training, and is used for recreational activities in inland waters such as lakes and rivers or along coastlines, you are most likely looking at a boat. A final test is that if you call it a boat and the captain is offended, you are viewing a ship. For the most part, boat owners won’t mind what you call it.